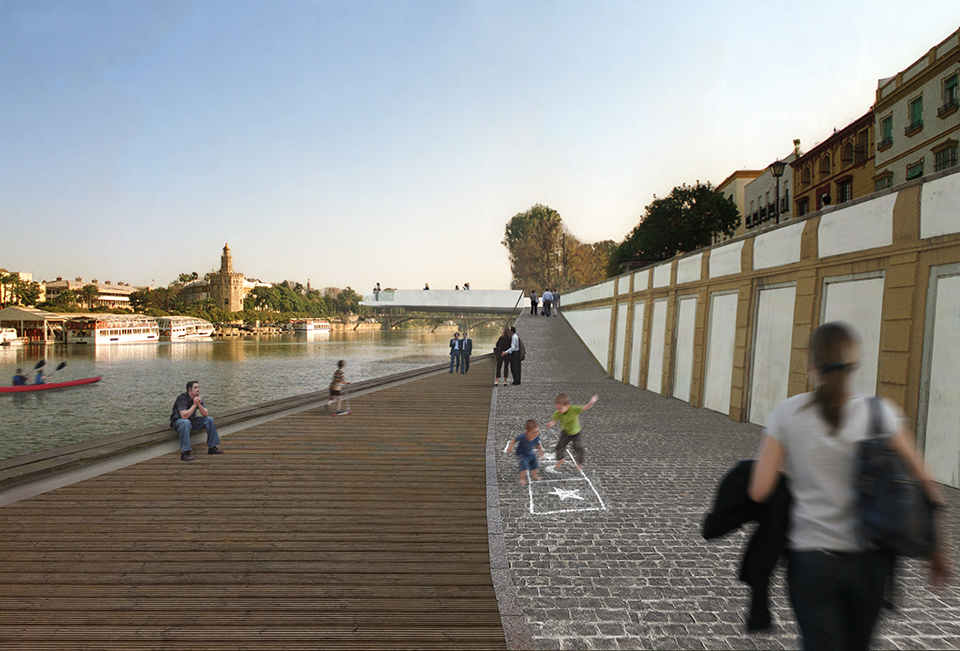 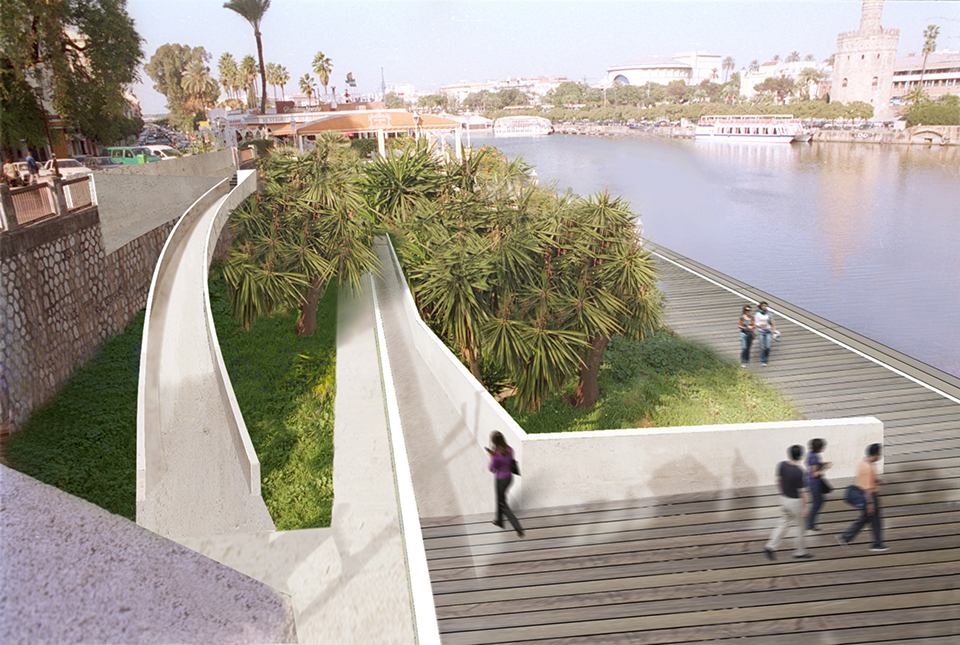 In march 2003 we designed a proposal for the regulation of the Betis street and also a new promenade on the right bank of the Guadalquivir river, a project initiated by the Town Planning Department Of Seville City Council. The idea of creating a lower passage between San Telmo and Isabel II bridges, on the right margin of Guadalquivir, was a part of the initial approval of the General Urban Development Plan.
According to the general plan of the city’s green areas, this site, that is a part of the historical docks on the right side of the Guadalquivir, should be rehabilitated. With the aim to preserve the riverbank, the general plan establishes a structural continuation from the promenade of the bank of Cartuja (Area of the EXPO 92), between Alamillo and Chapina bridges, the riverwalk of Nuestra Señora de la O and the new bank between San Telmo and Triana bridges.
The river promenade
One important aspect was to maintain the various atmospheres that exist alongside this river boarder. Between Isabel II bridge and Duarte street, perpendicular to Betis street, the passage is formalized and urbanized through the construction of docks and embankment. And in the area between Duarte street and San Telmo bridge, the line of communication consists in natural vegetation and trees.
The first part of the promenade: Isabel II bridge – Duarte street. The urban riverbank
The existing river bank was constructed in 1787 and the profile of the actual docks terminated in 1870. In this part of the project the original ramps should be restored, re-establishing the contact with both Betis street and docks. The actual profile of this communication system, more voluminous than the original one, does not permit the same contact with the dock, and it also invades considerably the Betis street.
The lower level of the riverside construction continues parallel with the Betis Street and reaches the Isabel II bridge where it connects with the passage of Nuestra Señora de la O. The treatment of the riverbank is prolonged under Isabel II bridge an reaches Triana Market area. This is an aspect that strengthens the continuous visual line and it also eases the communication for pedestrians alongside the river.
The second part of the promenade: Duarte Street – San Telmo bridge. The soft riverbank
This sector contains the old port that used to be occupied by shrimp and prawn sellers. However the abandonment of this zone has during the years created a richly vegetated area that is a characteristically trait of this margin. It is a riverside with natural vegetation, green and soft, whose trees require urgent protection.
This area should be maintained as a green zone, and for that reason constructions at this part of the site should respect green surfaces and cultivated areas. In addition this sector contains building structures with façades that have suffered various modifications so the conservation of this cultural signs have little interest. These above mentioned listing are guidelines that should assure the desirable state of this spot.
The square-viewpoint
As transition element between both levels, the green zone and the more urbanized one, we posed the construction of a small square-viewpoint over the axis “Church of Santa Ana – Cathedral”, in front of Duarte street and over the river promenade. The square would offer excellent views over the river and the historic center of the city, increasing the surface of the small sidewalk of Betis street. Under the square, in the place occupied nowadays by the police station, it would be possible to build new facilities.
The new promenade
This passage is situated at the second level of the docks and ends with San Telmo bridge, containing ramps that leads to Plaza de Cuba.
This new river line can be reached from various points of Betis street. The public space between Rio Grande restaurant and San Telmo bridge is today an open area, free of buildings, and for that reason the recovery of this sphere is considered as indispensable.
The passage that communicates with the river boarder should be a stable and rigid surface. Moreover the access should not be altered by changes in the water level, an important aspect to ease the availability of bicycles, minors and handicapped. The passage could have a structural section of reinforced concrete elements, constructed on piles. (Depending on prospective studies of the riverbed, the piles might be substituted by a more economical and simpler technical solution). A continuous bench would act as a protection against falling while allowing the installation of walkway lights. Both the pavement of the promenade and the bench would be made with teak planks. The constructed new line adapt to irregularities that are present at the river boarder. Moreover it also absorbs, by means of land fillings or proper growths, the actual fronts that today appear as urban construction with landscaped lines.
>>En español