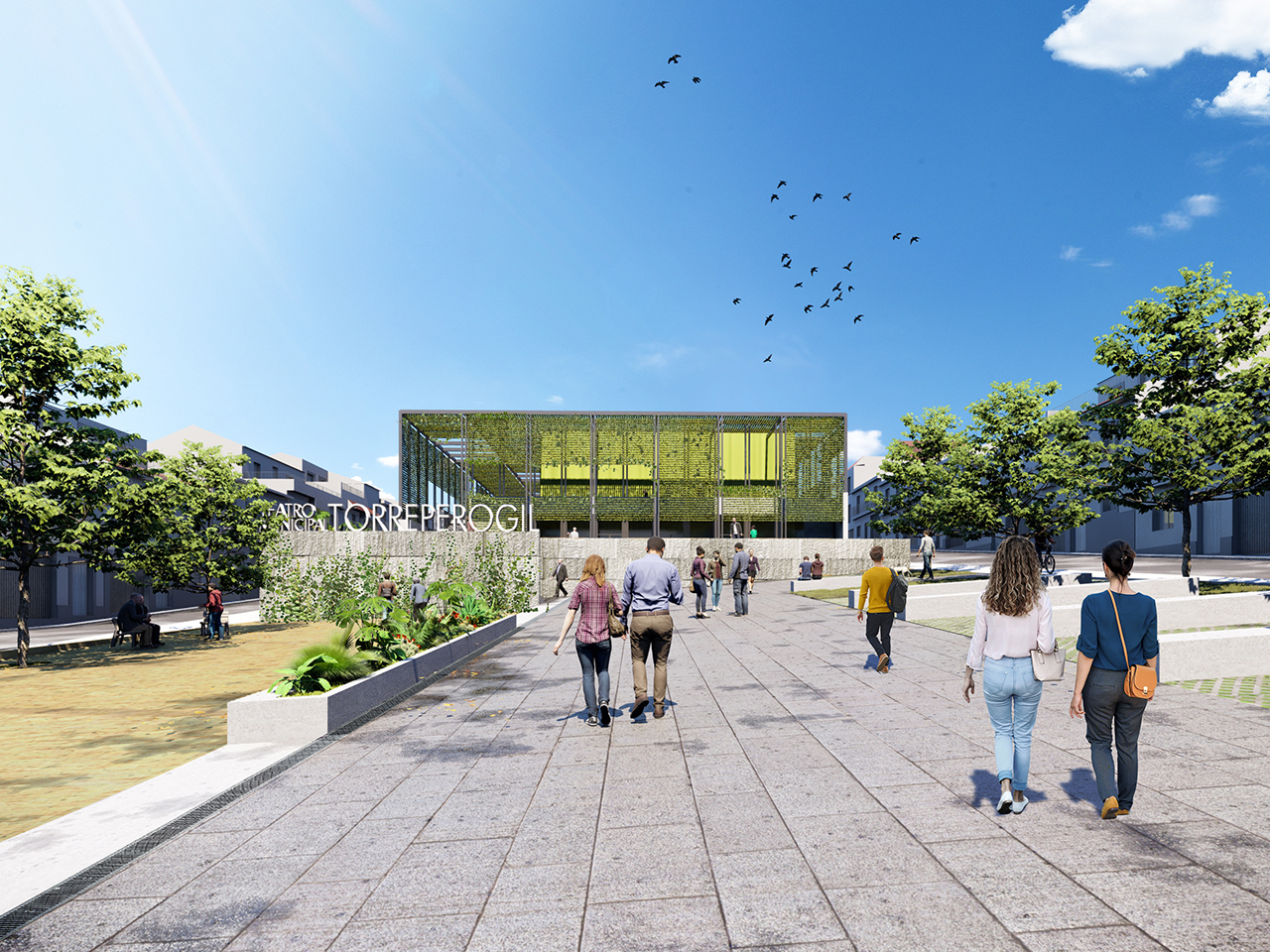 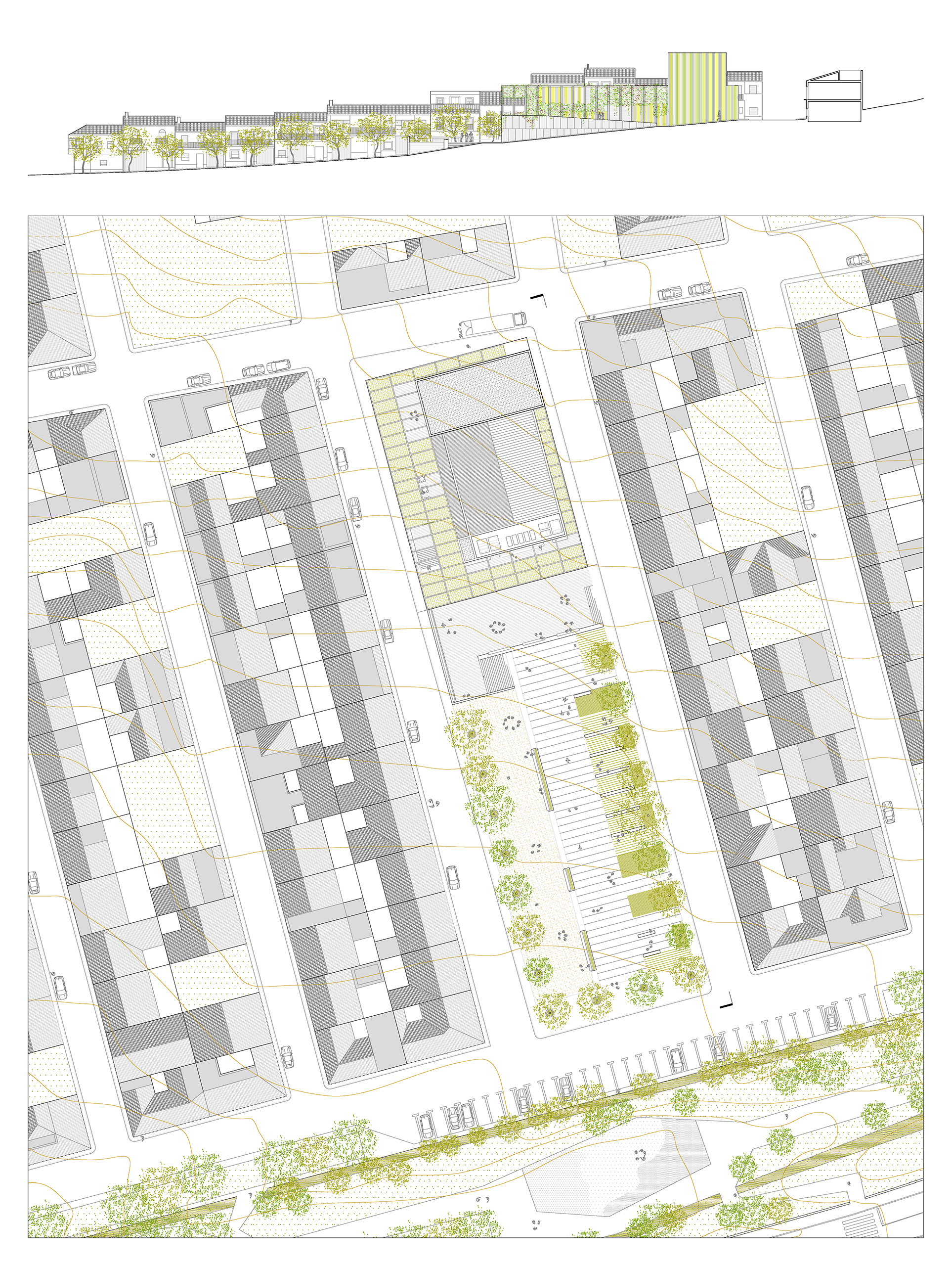 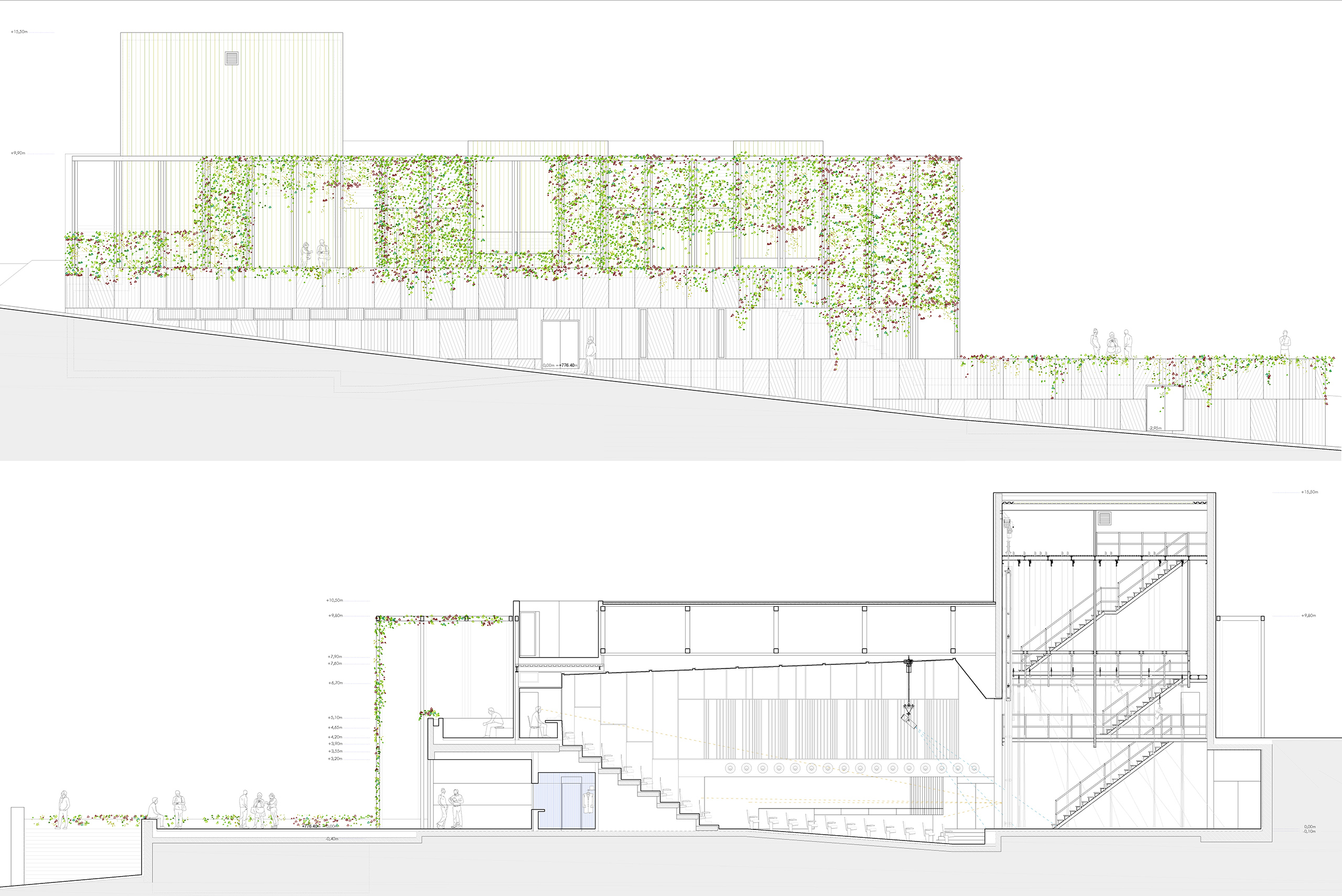 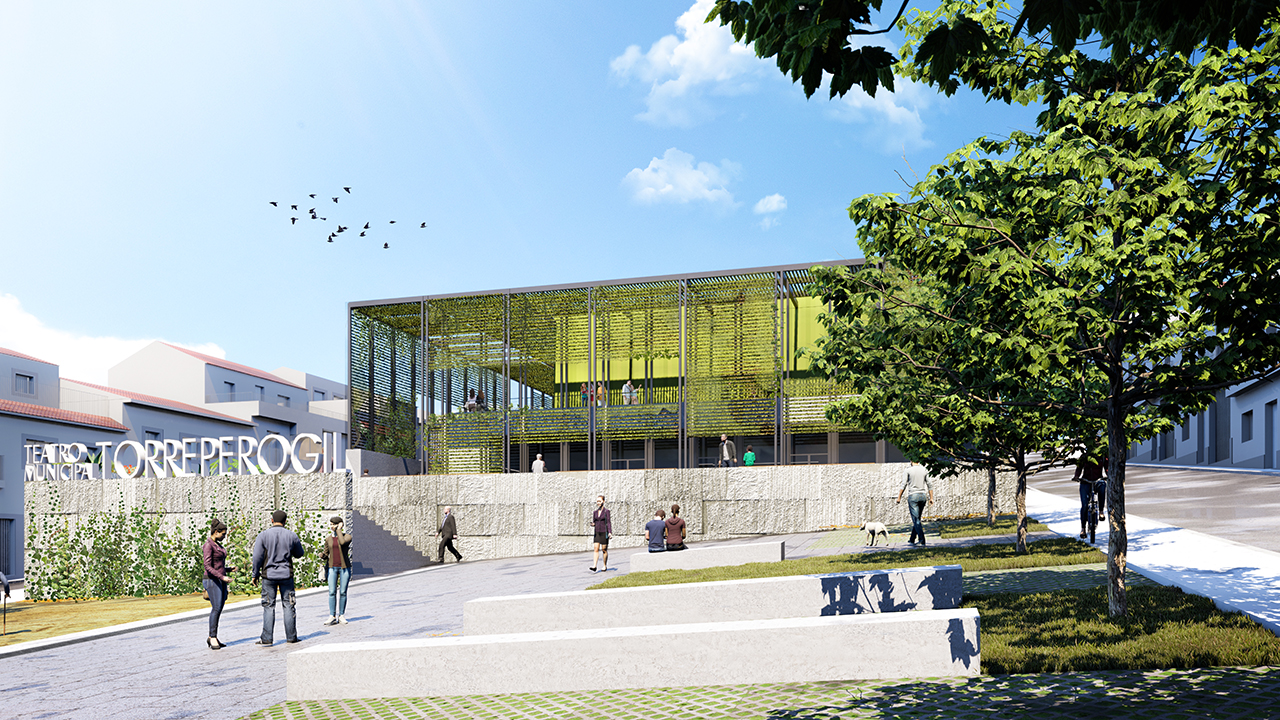 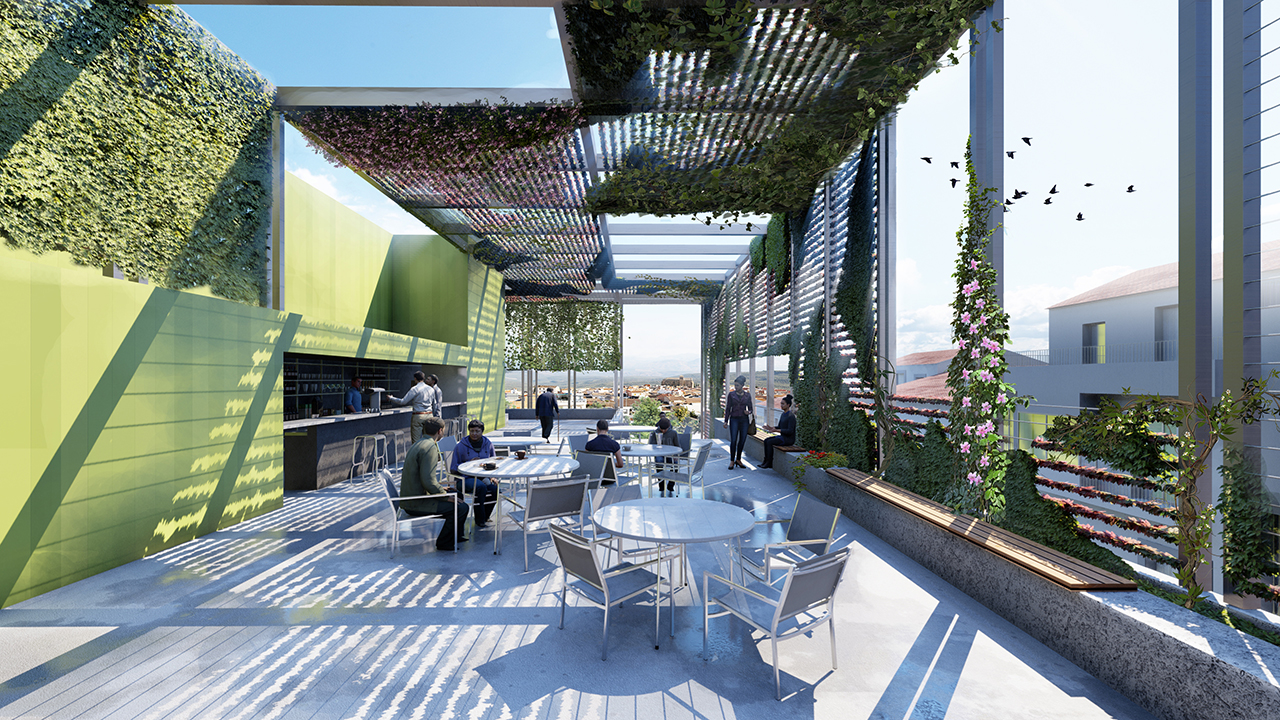 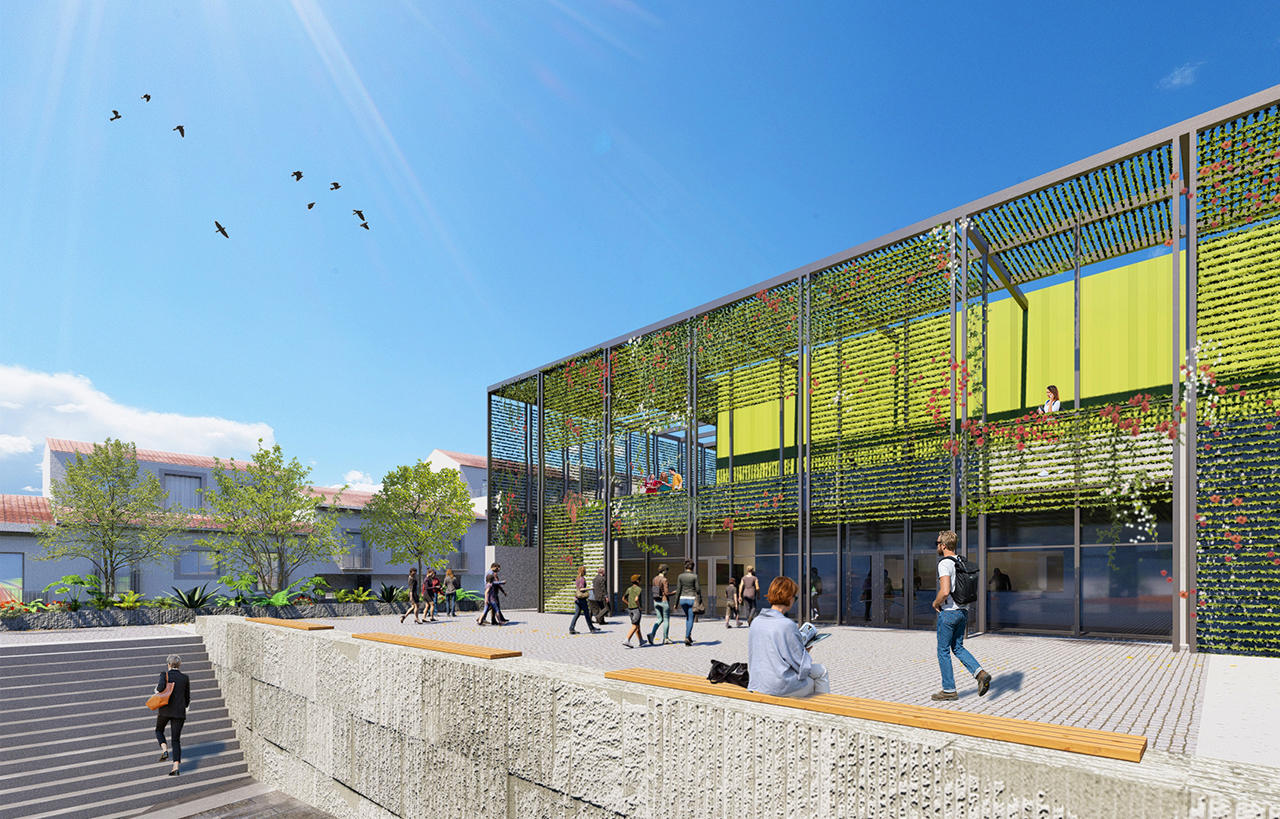 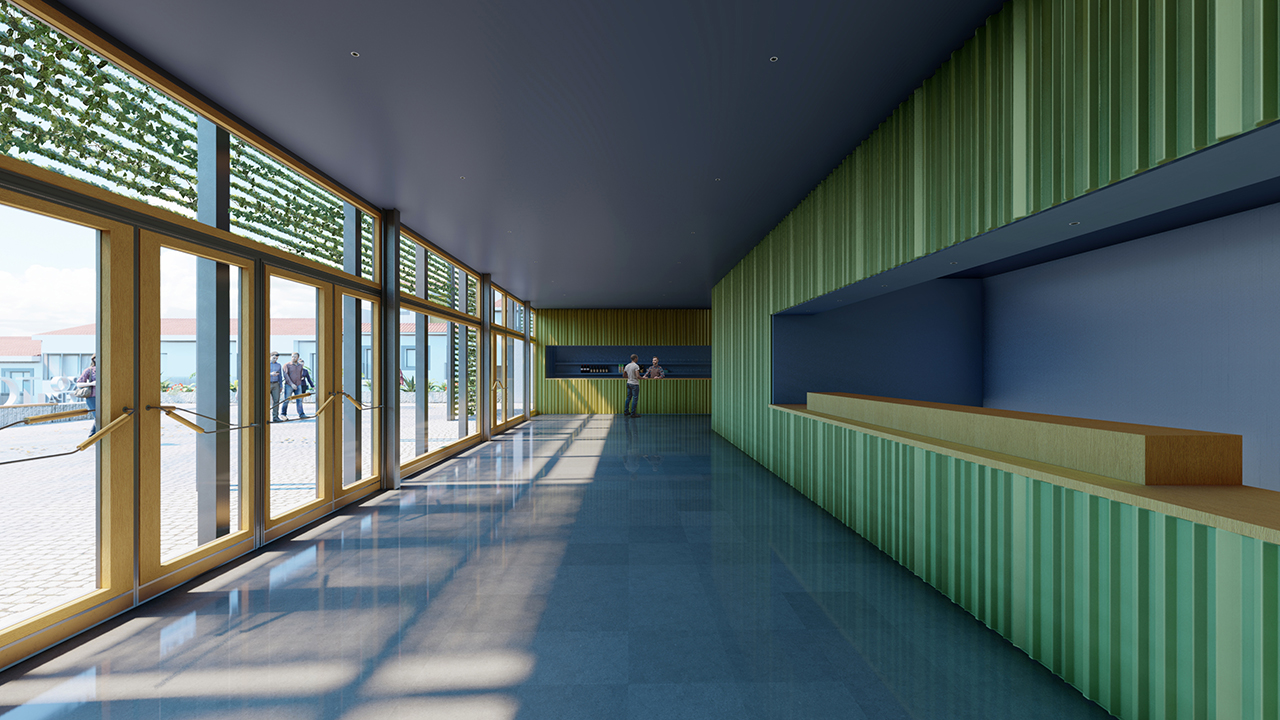 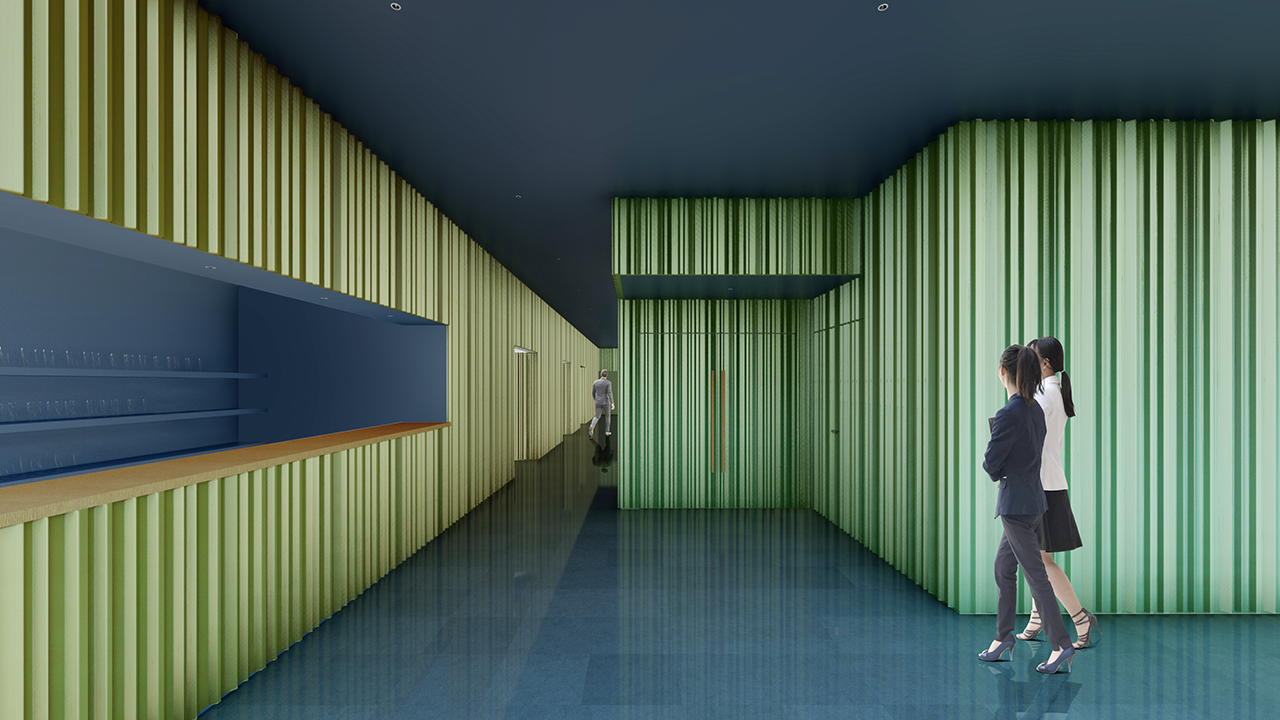 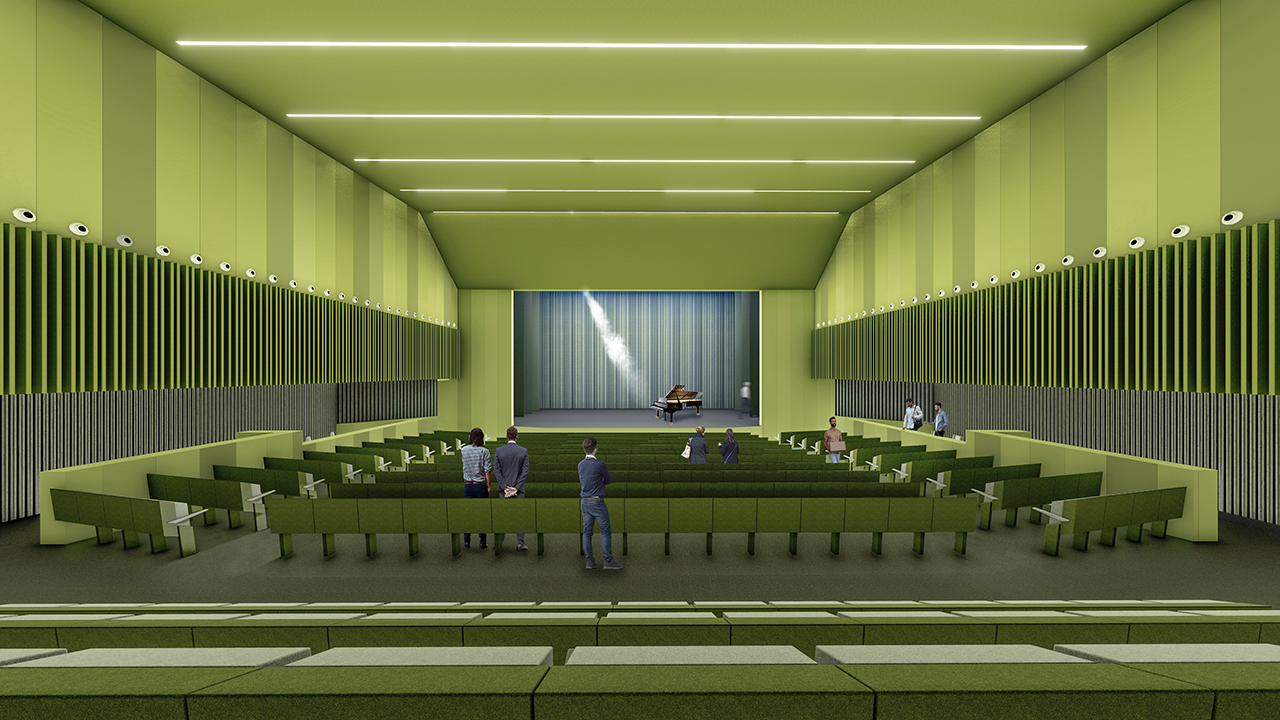 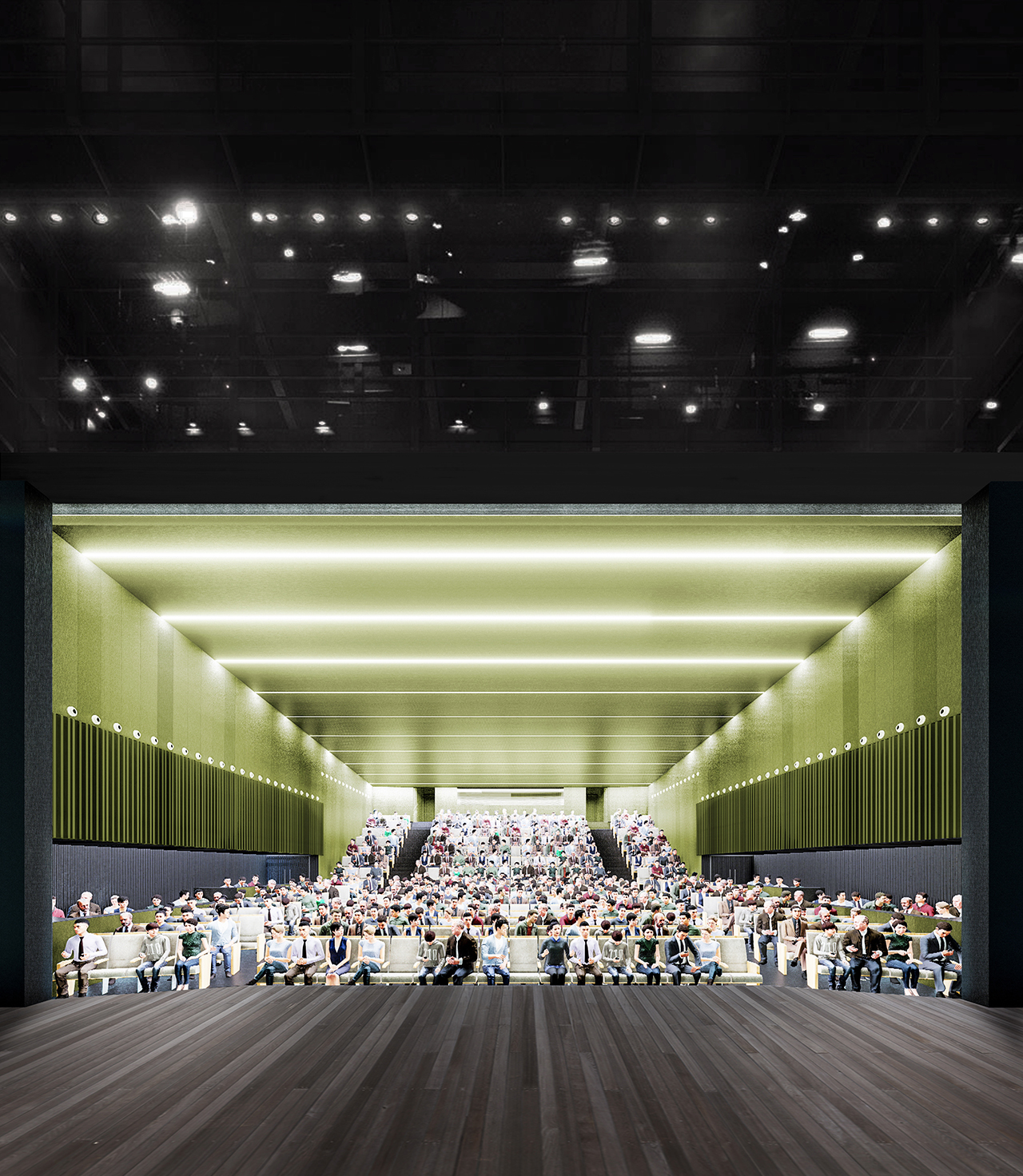 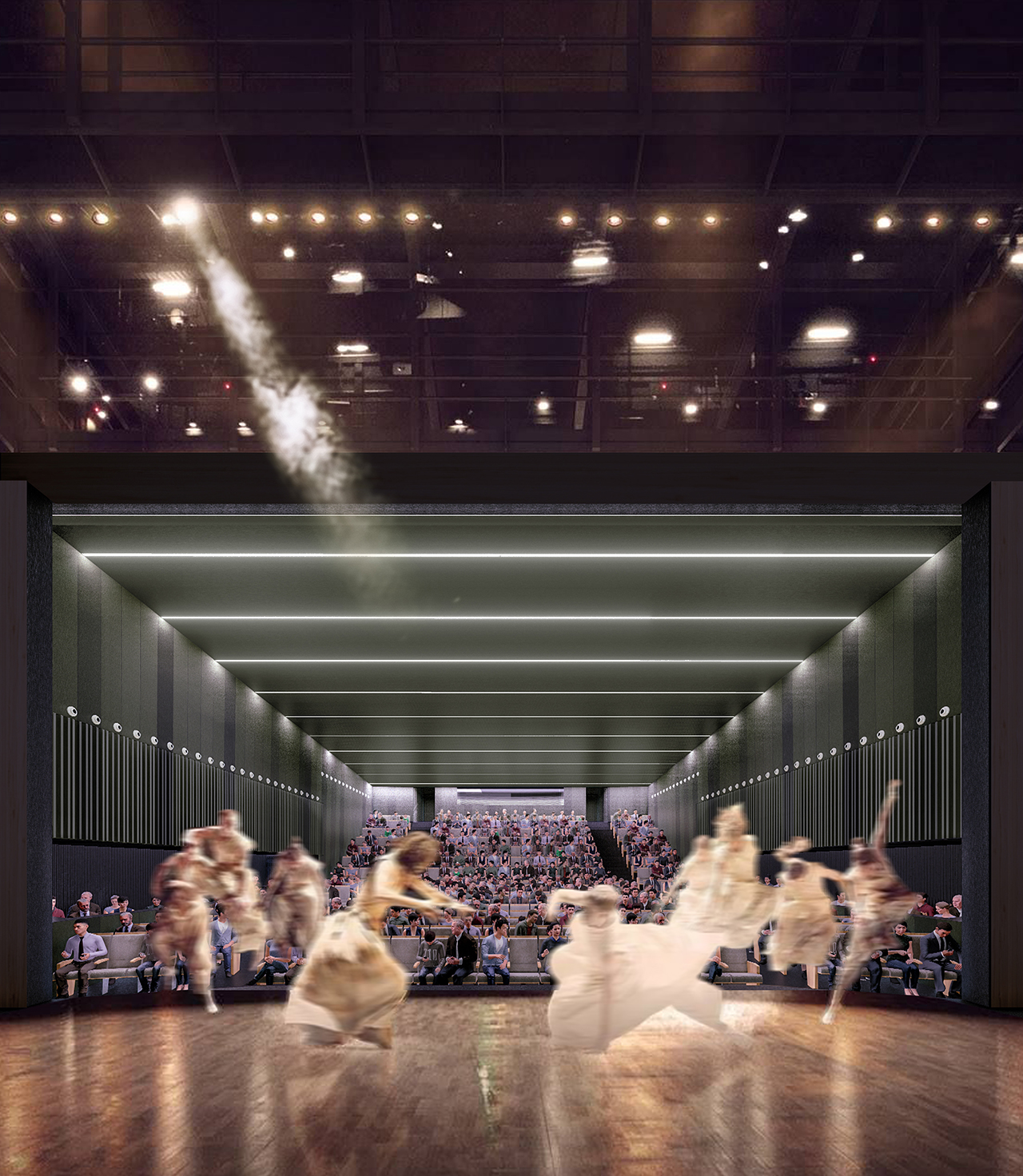 The new Municipal Theatre will be built in a strategic position of the Barrio de la Carrera, dominating the public space of the Parque Central and visible from the N-322 road that pass by the south, which will mean the revitalization and qualification of the area and will turn it into an architectural and cultural reference of the municipality.
The building occupies almost the entire plot, so the decisions regarding the siting have been limited to two fundamental aspects. On the one hand, orient it according to the north-south axis of the park, turning its public access towards the open space, providing a side entrance from Calle Velázquez for staff and the acquisition of tickets and reserving the north end for the necessary loading/unloading area. On the other hand, it has been crucial for the development of the project to decide the seat height of the theatre, given topographic conditions, accessibility requirements, the double objective of controlling the emergent volume with respect to the lower height of the surrounding buildings and minimizing earthworks as much as possible, as well as the creation of a raised plaza for the performance of different public activities. Thus, the theatre will be arranged on a base, with level access from Murillo street and by a wide stair from the park, setting up a horizontal surface in extension of the lobby, which will facilitate the transit and stay of the public at times of greater affluence.
Most of the functional program is developed on the ground floor: at the south, the lobby with snack bar, cloakroom, restrooms for the public and the accesses to the house; in a central position is the house, with a stalls flanked by side boxes, with a capacity for 470 spectators and an adequate volume for both music and speech (7m³ / person); to the north is the stage, with the required side wings and a well-dimensioned proscenium and the appropriate equipment to host all kinds of activities (cinema, theater, music concerts…); behind the scene there will be a wide backstage, connected to the dressing rooms and the elevator at both ends. Finally, the side of Velázquez street will contain, in addition to the aforementioned public restrooms, the management area and sales box office and the collective and individual dressing rooms.
The volume of the house will emerge on the first floor, containing the control / projection booth, the technical galleries and the grid over the scene and two emergency exits from the upper area of the stands. Surrounding the room, we propose a viewpoint plaza, with level access from the north end and from Murillo street, protected by steel pergolas that will allow the growth of vegetation. A plaza that will allow the organization of outdoor activities, the use and enjoyment of a possible cafeteria and a privileged view of the urban center of Torreperogil, highlighting Santa María la Mayor Church and the Castle of Torres Oscuras, and the magnificent views of the foothills of the Sierra Mágina Natural Park and the olive groves.
The house has been designed by tracing a continuous stalls (with variable slope), with a depth of 20 m and a width of 15.30 m, avoiding undesirable reflections. This set-up, considered optimal both for visibility reasons and for its acoustic behavior, avoids the problems that cause amphitheaters or balconies in terms of acoustics. Next to the entrances to the house, two side boxes enclose the audience in a certain way, giving it that characteristic feature of the theatres. Along with these central entrances, the house has another access located next to the stage and the two upper emergency doors mentioned above.
Regarding the future planning of the public space, a restrained action is proposed, with a paved central strip and gardened-permeable areas on the sides. The arrangement of furniture and lighting pursues the maximum versatility of uses of this new urban space, a place for the citizen that will be complemented with the new cultural equipment. It is intended to conserve the existing trees and use vegetation adapted to the local climate for the new green areas. As a extension of these green strips, the raised plaza around the theater will have pergolas with climbing plants that will shade this space creating a pleasant living area.