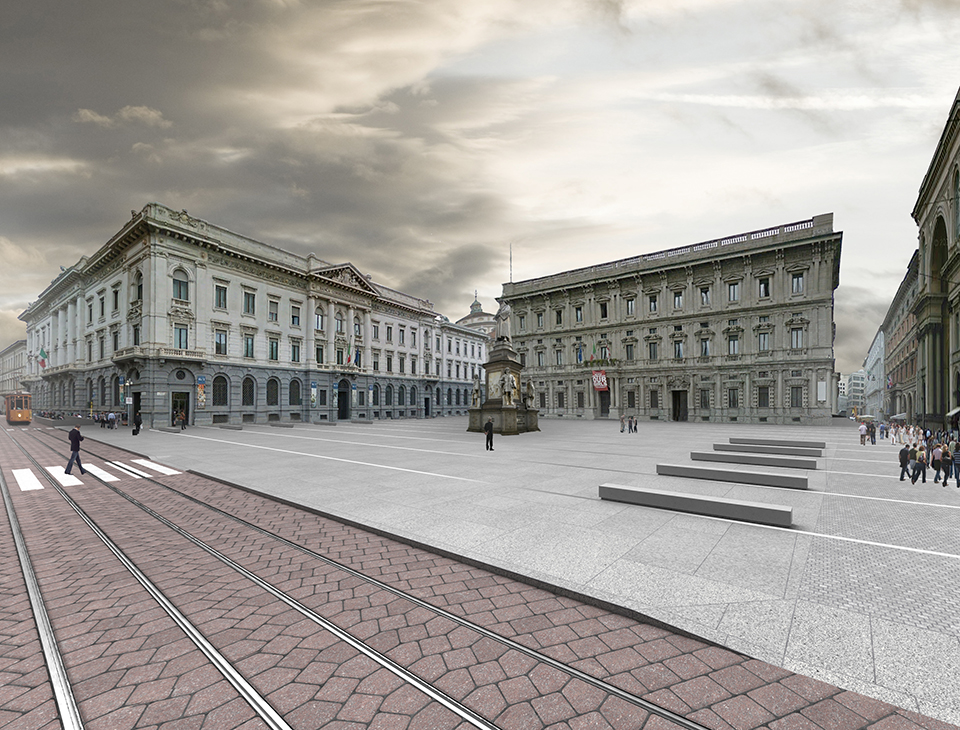 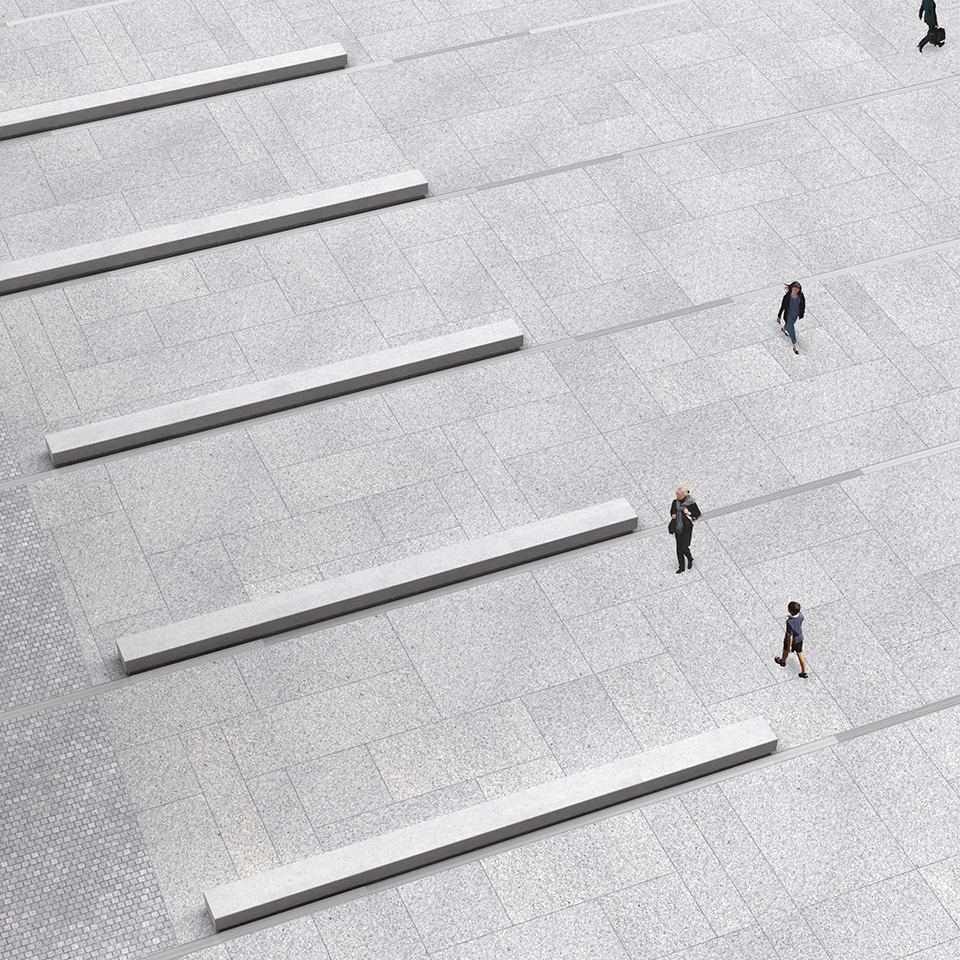 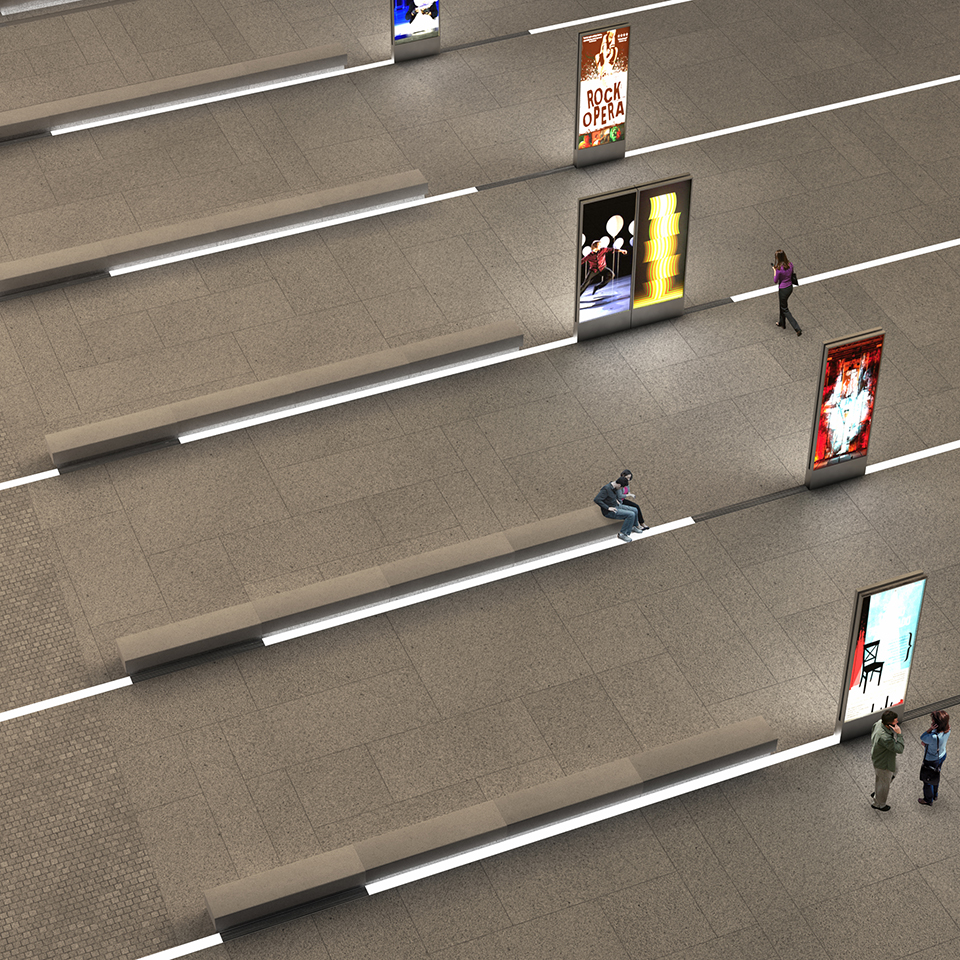 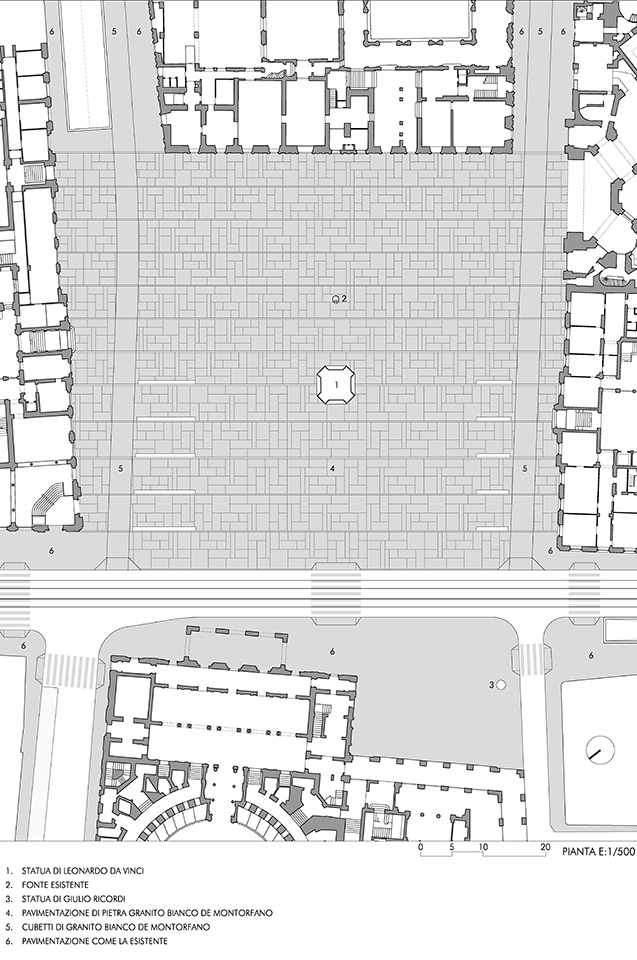 Piazza della Scala is one of the most representative urban spaces of Milan. It is defined by a series of highly expressive buildings whose uses and architecture have resulted in some design issues as accessibility and problems with both pedestrian and vehicular traffic. Our proposal has a clear goal: the enhancement of the architectural and sculptural elements that make up this urban area.
Moreover, in order to identify our project with the historical memory of the city and its characters, the citizens of Milan will have a new space in Piazza della Scala, with a noticeable reduction of vehicular traffic. The city bus that goes from Via Giuseppe Verdi to Largo Raffaele Mattioli will keep going at surface level, like restricted traffic in front of Palazzo Beltrami. The rest will pass under the Piazza.
Our proposal is highly determined by the new traffic system. An intervention that will excavate the space of the Piazza, except for the area of the statue of Leonardo Da Vinci, that will continue to chair the urban space of the theater. The traffic will go underground, with entry from Largo Raffaele Mattioli and exits through the streets Santa Margherita and Alessandro Manzoni. This underground way will give access to a new parking with one or two levels for cars and motorcycles. This parking would return part of the investment to the city while removing the parking around the Piazza and Teatro alla Scala.
We have designed a new pavement for the Piazza, a clean and clear plane that will house, in its current position, the marble sculpture of Leonardo Da Vinci, of Pietro Magni, once freed of the flower beds, benches and trees that encircled it. The iron fountain of the nineteenth century will be preserved in its original place.
We have conceived the space between Teatro alla Scala and the sculpture of Leonardo as an urban stage, where a series of lines across the pavement, parallel to tram rails of Santa Margherita street reminds the rails for scenography used at theatres. These lines will act as support for illumination, water drain, sound facilities, shading elements… and display cases or scenographic elements in relation to the Theatre programme.
The angle formed by the streets Alessandro Manzoni and Filodrammatici, next to the Theatre, is the space chosen to place the new sculpture in tribute to Giulio Ricordi, transforming this corner into new meeting point near the theater.
The area between the center of the Piazza and Palazzo Marino will be emptied of benches and urban furniture in order to improve the pedestrian flow between Galleria Vittorio Emanuele II and Gallerie d’Italia. The pavement of the Piazza and surrounding sidewalks, including sidewalks around Teatro alla Scala, will be built with granite stone, as a continuation of current finishes. The stone work between parallel lines will be built with Montorfano white granite. The new benches will be finished with white limestone.
>>En español